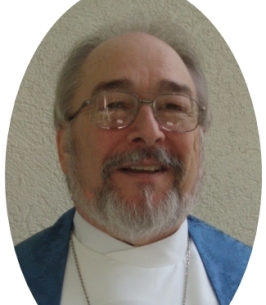 Memorial Candles Lit for Ronal | SEE ALL
Light a Candle
"We are honored to provide this Book of Memories to the family."
— Nicely Funeral Home
Funeral Details Memory Wall Photos & Videos Send Flowers

He was born 1 January 1948 in Clifton Forge to O.R. and Cyntha (Childers) Nicholas. He graduated from Clifton Forge High School in 1966. He earned a BA in psychology & religious studies at Lynchburg College in 1970 and earned a MSIS in Information Science at the University of Pittsburgh in 1976. In 1988 he completed a Masters of Divinity degree at Andover Newton Theological School, Newton, Massachusetts. He was licensed in ministry by Clifton Forge Baptist Church in 1967 and ordained at First Baptist Church, Norwood, Massachusetts, for the American Baptist Churches, 29 May 1988, and served with his second wife, Rev. Inga Freyer-Nicholas, OSL, as pastor of churches in Massachusetts, Iowa, Utah, California, Wisconsin, Michigan, Florida, and Virginia, retiring in 2018. In 1992, he took vows in the (United Methodist) Order of Saint Luke and professed life vows in 2010.

He was preceded in death by second wife, Inga, his parents and eldest brother, Norman. He is survived by a son, Andrew (Kristina) of Frederick, MD, two (step)daughters, Lisa Zifcak Dunn (Alvin), of Washington, DC, and Christina Zifcak, of Brooklyn, NY, six grandchildren, a brother, Raymond (Mary) of Calabash, NC, nieces, nephews, and other family, including grandnieces, grandnephews, and a great-grandniece. He is also survived by ex-wife Helen Harrison, Inverness, FL, and former domestic partner Joyce Shores Gordon of Rocky Mount, VA.

Since ordination, he served in several associations and regions of the American Baptist Churches (ABC) as an officer. He also served a term as senator of the ABC Ministers Council. Besides the ABC, he had ministerial standing in the United Church of Christ (UCC), Disciples of Christ, and Baptist General Association of Virginia. He taught psychology at Lynchburg College and was a medical educator at the University of Pittsburgh and University of Massachusetts Schools of Medicine. He was a lecturer in worship at Andover Newton and was a volunteer assistant professor of Worship and Pastoral Care at Milwaukee Theological Institute. He wrote many articles for various publications and was a Contributing Editor for Robert Webber’s eight-volume Library of Christian Worship (1992). During his years in ministry he served as a mentor for students at Lexington Theological Seminary in Kentucky.

The order for worship, according to customary UCC use, is adapted from “Service of Word and Sacrament I” and “Order for Thanksgiving for One who has Died” in The New Century Hymnal © The Pilgrim Press, 1995. Portions of the Eucharist are according to the United Methodist Book of Worship, © 1993.As a vocalist, he sang in the Choirs of Clifton Forge Baptist Church and in several other churches. He was section leader, president, and student director of the CFHS Chorus and chosen for the All-State Regional Chorus and the All-Virginia Chorus. He sang in the Lynchburg College Touring Choir and was a singer and program manager of the Ecumenical Choir of Grafton, Massachusetts. He was a singer, translator, lecturer, and board member of the Central Florida Master Choir.

Also, he received the Vigil Honor from Shenandoah Lodge of the Boy Scouts Order of the Arrow; the Outstanding Volunteer Service Award of United Way of Central Massachusetts; and First in Class in Homiletics (preaching) from Andover Newton. He was served as a member delegate of the General Synod of the UCC (2011-2014).

He was a member of First (American) Baptist Church, Midland, Michigan, and Founding Pastor and member of Tree of Life United Church of Christ, Roanoke.
In keeping with his wishes, his body has been cremated. A memorial service will be held on Monday, May 6, 2019 at 12:00 Noon in Central United Methodist Church, Clifton Forge with Reverend Lynn Wright officiating. The family will visit with friends on Monday morning from 11:00 AM until the time of service at the church. A gathering of friends and family will be held after the service in the Fellowship Hall at the church.
Memorial gifts may be made to Central United Methodist Church, P.O. Box 16, Clifton Forge, VA 24422.
Nicely Funeral Home, Clifton Forge is handling arrangements.

To send flowers to the family of Ronal Karl Nicholas, please visit our Heartfelt Sympathies Store.

We encourage you to share any memorable photos or stories about Ronal. All tributes placed on and purchased through this memorial website will remain on in perpetuity for future generations.

Provide comfort for the family of Ronal Karl Nicholas by sending flowers.
Send Flowers
next page >>
Page 1 of 0
Share
×

Thank you for sharing!

Or use your email:

Connect with families at their time of loss. By subscribing to email updates, you will receive two daily updates containing all new stories, photos, candle lightings, condolences, and more.