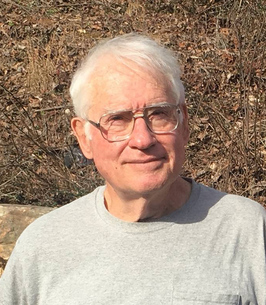 Print
Commander Laurence “Larry” Adams White, Jr., age 84, died May 4, 2019 in his home in Covington, Virginia (White Rock Gap) after a long battle with cancer. He was the husband of Earlene Singletary White, his loving spouse of sixty-one years.
CDR White, the son of CAPT Laurence A. and Helen E. White, was born in Long Beach, CA on January 5, 1935. He graduated from the U. S. Naval Academy in 1956 and completed a successful career as a Naval Aviator, retiring in 1977. He met Earlene during flight training in Pensacola, FL and married in Foley, AL in 1957. He flew various aircraft including the F2, F4, A4, and A6. His service included over seventy combat missions in Vietnam in 1968.
After retirement from the Navy, he and his family moved to the Alleghany Highlands where they built a home and operated a farm. In addition to a stint as an instructor at the Naval Academy from 1969 to 1972, he taught at Dabney S. Lancaster Community College and taught Physics at Bath County High School for several years. He was an avid ‘rock hound”, lapidary and jewelry designer and taught classes in silver and gold smithing at the William Holland School for Lapidary Arts in Georgia. He was a long time member of the Roanoke Valley Mineral & Gem Society.
He was of the Roman Catholic faith and a member of St. Joseph Catholic Church in Clifton Forge since settling in the Highlands in 1977. He was the regular cantor at Sunday services and served on the Parish Council for many years.
In addition to his wife, CDR White is survived by five sons, Laurence “Trey” A. White and wife Sarah of Thomasville, PA, David C. White and wife Jeanne of Delmar, MD, Daniel A. White and wife Judith of Charlottesville, Stephen M. White and wife Jacqueline of Annandale, and Brian T. White and wife Linda of Clifton Forge. He is also survived by twelve grandchildren, Katherine A. White of Thomasville, PA, Amanda M. Godfrey and husband Paul of Spring Grove, PA, Christopher M. White and wife Julie of Spring Grove, PA, Brenna M. White of Grand Canyon, AZ, Major Lauren E. White U.S. Army, of Fort Detrick, MD, Benjamin M. White of Renton, WA, Justin D. White of Delmar, MD, Aaron D. White and Nathan L. White of Westphalia, IN, Thomas W. White and Joseph W. White of Annandale, and Michael B White of Covington; and three great grandchildren, Sierra, Bryan, and Olivia. In addition, he is survived by a brother, James S. White of Claremont, CA.
He was predeceased by a son, Michael D. White.
In keeping with his wishes, his body has been cremated. A memorial service will be held on Thursday, May 9, 2019 at 11:00 AM in the chapel of Nicely Funeral Home, Clifton Forge with Father Augustine Lukenge officiating. Interment will follow in Mt. Carmel Cemetery, Low Moor. Following the service, refreshments will be served at St. Joseph’s Catholic Church. The family will receive friends on Thursday morning from 9:00 AM until the time of service at Nicely Funeral Home.
The family suggests memorial tributes take the form of contributions to Mountain Regional Hospice Volunteers, P.O. Box 637, Clifton Forge, VA 24422, the Clifton Forge Area Food Pantry, P.O. Box 361, Clifton Forge, VA 24422, or the Blue Ridge Cancer Center, 1 ARH Lane, Suite 203, Low Moor, VA 24457.
To send condolences to the family online, please visit www.nicelyfuneralhome.com.

We encourage you to share any memorable photos or stories about CDR Laurence . All tributes placed on and purchased through this memorial website will remain on in perpetuity for future generations.

Janice Ferstermann sent flowers to the family of CDR Laurence  "Larry" White Jr..
Send Flowers
SF
I’ve had the great pleasure of getting to know Larry and his wife over the past 6 years while visiting with their grandson Chris. Larry was someone who had a lot of knowledge and life experience to share. Thank you for the memories.
Showers Family - Wednesday May 08, 2019 via Condolence Message
Share This:

AW
Prayers for your family. We welcomed you to the area and helped you settle in the Highlands, we are thankful for Larry's and Earlene's contributions.
Ann Barton Warren - Tuesday May 07, 2019 via Condolence Message
Share This:

So sorry for your loss. Stephen Ferstermann , Janice an family
Janice Ferstermann - Tuesday May 07, 2019 via Heartfelt Sympathies | Order flowers in memory of CDR Laurence
Share This:

BW
Our sincere condolences
Becky and Chuck Woodson - Tuesday May 07, 2019 via Condolence Message
Share This:
1
Page 1 of 1
Share
×

Thank you for sharing!

Or use your email:

Connect with families at their time of loss. By subscribing to email updates, you will receive two daily updates containing all new stories, photos, candle lightings, condolences, and more.