Memorial Candle Tribute From
Nicely Funeral Home
"We are honored to provide this Book of Memories to the family."
View full message >>>
In Memory of
Lee
Dotson
1933 - 2020
Menu
Plant a Tree In Memory of Your Loved One
Click Here 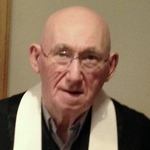 He was born November 18, 1933 in Covington, Virginia to the late Charles Lee Dotson and Mary Agnes Wickline Dotson. He served in the United States Navy and was a machinist for Acadia Polymers, Inc. He then went to Duke University and received his ministry degree and has been a minister at Mountain Valley United Methodist Church. He loved golf, fishing and hunting.

In addition to his parents, he was preceded in death by his first wife, Shirley Ruth Carper Dotson.
He is survived by his wife, Thelma Wolfe Dotson of Clifton Forge; a daughter, Bonnie Dotson Holt and husband Don of Reedsville, WVa; two step daughters, Deborah Ginger and husband Billy of Blue Ridge, Kimberly Kelley of Salem; a sister, Ruby Ramsey of Covington; three grandchildren, Audra Holt-Rolen and husband Timothy Jr., Allen Ginger, Grace Kelley; a great granddaughter, Katie Rolen; a number of nieces and nephews; and his special prayer group.