To share your memory on the wall of Paul Beverly, sign in using one of the following options:

He was born January 30, 1927 in Nelson County, Virginia to the late Pete and Cora Beverly. He served in the United States Army during World War II. He was a former car knocker for the C&O Railroad, and was a retired foreman for Adams Construction Company. Paul was a member and senior Deacon of Jackson Memorial Church. He also founded and was a member of Straight Street. He was a mechanic and handyman, who enjoyed fishing, gardening, helping people, and visiting friends.

In addition to his parents, he was preceded in death by his wife, Alice Mae Godfrey Beverly; a daughter, Gloria Beverly; a son, Norman Bruce Beverly; three brothers; four sisters; and four grandchildren.

A funeral service will be held on Friday, February 28, 2020 at 1:00 PM in the Chapel of Nicely Funeral Home, Clifton Forge with Elder Leon Taylor officiating. Interment will follow in Mountain View Cemetery. Grandsons will serve as pallbearers. Military Honors will be conducted at the graveside by the Curtis A. Smith, Veterans of Foreign Wars, Post 1033. The family will receive friends from 11:30 AM until time of service at Nicely Funeral Home.
Read Less

To send flowers to the family or plant a tree in memory of Paul David Beverly Sr., please visit our Heartfelt Sympathies Store.

There are no events scheduled. You can still show your support by sending flowers directly to the family, or planting a memorial tree in memory of Paul David Beverly Sr..
Visit the Heartfelt Sympathies Store

We encourage you to share your most beloved memories of Paul here, so that the family and other loved ones can always see it. You can upload cherished photographs, or share your favorite stories, and can even comment on those shared by others.

On behalf of Rev. Preston Tyler and the congregation of Mt. Olivet Baptist Church, we would like to express our most sincere sympathy at the passing of Mr. Paul Beverly, Sr.. In this time of great sorrow, please know that all of you are in our thoughts and prayers.

Mr. Beverly is resting safely in Jesus’ arms where he will endure no more sickness. He is at peace. Not only will his family miss him, but the churches, the community, his neighbors, and friends will miss him also.

Our prayers for your family are that you look to the Lord for strength “Cast all your care upon Him; for He cares for you.”

Posted Feb 19, 2020 at 10:51pm
To the Family of Deacon Paul Beverly:
Pastor Preston, the Official Board and members of First Baptist Church, Iron Gate are saddened at the passing of Deacon Beverly. We extend our sincere and heartfelt sympathy to the family. A pillar of the Iron Gate community, Deacon Beverly had a beautiful spirit and a ready smile along with an encouraging word for those he met. He will be sorely missed. To the family, we pray you will look to the Lord for your strength at this time. He is your refuge, a very present help in time of need.
Remembering you in prayer,
Rev Harold G. Preston, Pastor
Sylvia Jones, Church Clerk
Comment Share
Share via:
SF

Posted Feb 17, 2020 at 06:35pm
Deep condolences to my VA family. RIP Uncle Paul. Say hi to Grandma Liz for me and keep an eye on her!
Comment Share
Share via: 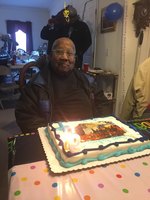