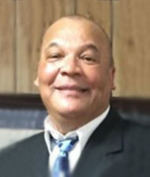 Charles Burnett Godfrey 67, of Clifton Forge, Virginia went to be with the Lord on Tuesday, April 28, 2020. Charles was born on February 25, 1953, in Clifton Forge, Virginia. Charles was the 7th of 7 children of the late Charles Godfrey and Gaynell Alice Godfrey. He received his education in the Clifton Forge school system. Charles Godfrey attended Albuquerque Barber College in Albuquerque, New Mexico where he received his Barbers license.
Charles began playing the piano and singing at a young age and grew to be a well-known gospel musician and singer. His piano playing and singing made him a legend in the Clifton Forge area. Charles played and performed at a multitude of churches. He played faithfully the past several years for Main Street Baptist Church, Clifton Forge. Charles received many awards throughout the years for his musical and vocal abilities, including the Martin Luther King award. He received his evangelical license under the leadership of Elder Alfred Deering.
Charles was such a huge presence in this world, the lives he touched with his gifts of song, love, compassion and care were immeasurable. He was always there to lend a helping hand and even as he himself was diagnosed with cancer you could find him on the streets of Clifton Forge handing out meals that he prepared for those less fortunate.
Charles performed every year at the Area 18 Special Olympics. He never turned down a chance to sing and play his music giving praises to God. He was a member of the Area 18 Singing Wonders and The Stars Performers. Charles served in the community in whatever capacity was needed.
In addition to his parents, he was preceded in death by one brother, Nelson Godfrey: and three sisters, Mary Young, Brenda Arnold and Julia Johnson.
Left to cherish his memories is his wife Lillian Godfrey of Roanoke, Virginia; a son, Christopher Godfrey of New Haven, Connecticut; two brothers, Edward and Earsey Godfrey of Clifton Forge, Virginia; a half-brother; Vincent Cooper of Clifton Forge, Virginia. Many wonderful friends: a special friend, John Cook of Clifton Forge, VA and Ms. Arlene Cooper, who he referred to, as his second Mother of Clifton Forge, VA; and a host of nieces, nephews, cousins, family and friends.
A graveside funeral service will be held on Monday, May 4, 2020 at 1:00 pm at Mountain View Cemetery, Clifton Forge and if you are unable to attend, visit www.homegoin.com. We ask that only family and close friends attend the graveside service as we will have to continue to abide by the social distancing guidelines established by the Governor. All others can attend the live-stream service at www.homegoin.com. A memorial service is planned for a later date.
Condolences and floral tributes may be expressed online or sent to Nicely Funeral Home. Monetary contributions toward a memorial tombstone can be sent to Reverend Arlene Cooper, 809 Mound St. Clifton Forge, VA.
Nicely Funeral Home, Clifton Forge is handling arrangements.