To share your memory on the wall of Loretha Stinespring, sign in using one of the following options:

In addition to her parents, she was preceded in death by her husband, Bobby Kay “Bob” Stinespring; two brothers, Robert “Bob” Putnam and H.E. Putnam; and a sister Myrene LeHew.
She is survived by two sons, Kevin Lewis Stinespring of Clifton Forge and Bryan Wade Stinespring of Newark, Delaware; a sister, Ernestine Tyler of Collinsville, Virginia; four grandchildren, Daniel Franklin Stinespring, Caroline Frances Stinespring, Olivia Jane Stinespring and Ella Grace Stinespring; and a number of nieces, nephews and cousins.

A funeral service will be conducted on Tuesday, September 22, 2020 at 2:00 P.M. in Clifton Forge Presbyterian Church with Rev. Paul Brokaw, Rev. Grover Nicely and Mr. Chris Fisher officiating. In keeping with her wishes, her body will be cremated following the service. Interment of cremated remains will be made in Central Advent Christian Cemetery at a later date. Active Pallbearers will be Danny Tyler, Eddie Putnam, Matt Garten, Christopher “Dizzy” Garten, Daniel Stinespring and Brandon Johnson. The family will receive friends on Tuesday from 12 Noon until time of service in the sanctuary of the Clifton Forge Presbyterian Church.

To send flowers to the family or plant a tree in memory of Loretha Jane Stinespring, please visit our Heartfelt Sympathies Store.

There are no events scheduled. You can still show your support by sending flowers directly to the family, or planting a memorial tree in memory of Loretha Jane Stinespring.
Visit the Heartfelt Sympathies Store

We encourage you to share your most beloved memories of Loretha here, so that the family and other loved ones can always see it. You can upload cherished photographs, or share your favorite stories, and can even comment on those shared by others.

Posted Sep 22, 2020 at 10:45am
Kevin and Bryan so sorry to hear about your mom passing, you are in our thoughts and prayers.
Mason Layne
Comment Share
Share via:
SH

Posted Sep 21, 2020 at 07:49pm
Always a joy to be around Loretha she was always cutting up with me and had a big smile on her face. Loved when we got to go to Cucci's for Christmas wished we could have gotten together a lot sooner to have done this. Kevin and Brian your Mom was so proud of you both and also her grandchildren. Love you guys!
Comment Share
Share via:
DT

Posted Sep 20, 2020 at 06:47pm
Please accept our sincere sympathy at this difficult time. Loretta always had a smile and a kind word. May her influence live on in those whose lives she touched along life’s way. Blessings and love, Donna and CR Nicely
Comment Share
Share via:
KS

I not only lost my mother but I lost my best friend. I can not explain the pain and emptiness I am experiencing. I do find a since of comfort mom is not suffering anymore and I know one day we will all be reunited in heaven. Your loving son,Kevin 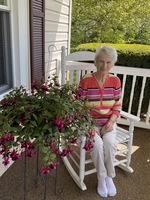