To share your memory on the wall of Gordon James, sign in using one of the following options:

He was born January 27, 1932 in Bradford, Pennsylvania to the late Earl Gordon James, Sr. and Nellie Stroup James. He served in the United States Navy in the late 1950’s and was a retired Chemical Engineer for Hercules in Covington. Gordon was very active in the community including helping with the Red Cross blood drive for 11 years, helping with the Clifton Forge Food Pantry since 2006, and being involved with the Clifton Forge Arts and Crafts Center. He was a member of the Covington and Hot Springs Rotary where he was the secretary for 11 years, the president for a year and the team leader for the group study exchange for the Philippines. He was a member of the Clifton Forge Presbyterian Church, since 1968, where he served on various committees, and was the Moderator for the Presbyterian Synod. From 1972-2018 he was a constant member of the Session of the church, and served on the collections/deposit committee from 1989-2019.

In addition to his parents, he was preceded in death by three sisters, Audrey J. Fox, Mona Robinson and Barbara Lore.

In keeping with his wishes, his body will be cremated. A celebration of life will be held on Friday, October 9, 2020 at 11:00AM in Clifton Forge Presbyterian Church with Reverend Paul Brokaw officiating. The family will receive friends one hour prior to the service in the fellowship hall of the church. The family asks that masks be worn and bright, cheerful clothing be worn in his memory.

To send flowers to the family or plant a tree in memory of Gordon James, please visit our Heartfelt Sympathies Store.

There are no events scheduled. You can still show your support by sending flowers directly to the family, or planting a memorial tree in memory of Gordon James.
Visit the Heartfelt Sympathies Store

We encourage you to share your most beloved memories of Gordon here, so that the family and other loved ones can always see it. You can upload cherished photographs, or share your favorite stories, and can even comment on those shared by others.

From all of us at the food pantry sent flowers to the family of Gordon James.
Show you care by sending flowers

Posted Oct 08, 2020 at 09:00pm
I had the pleasure of working with Gordy at Hercules. He always was a joyful person, willing to help everyone, but specially the younger engineers that did not know their way around. He was very technically knowledgeable and very experienced, which was great for us. I also played tennis with Gordy and Joe Kincaid. We used to drive to Lewisburg, West Virginia to play tennis. Gordy was a great person, and I am sure will be missed by us, his friends, by his coworkers, and his family.

From all of us at the food pantry

Posted Oct 06, 2020 at 11:05am
Our warmest condolences to Barbara and family, you all are in our thoughts and prayers at this difficult time.

From all of us at the food pantry purchased flowers for the family of Gordon James. Send Flowers

Posted Oct 06, 2020 at 10:53am
Barbara, to you and your family, we cannot imagine your loss; But know that in this time of struggle and sorrow; you are all in our prayers! Our loss is Heaven's gain, and we know he would toast that! Love to you all! Dave and Jenny Oeltjen
Comment Share
Share via:
CJ

Posted Oct 05, 2020 at 07:37pm
I was blessed to have known Mr. Gordon James my whole life being a lifelong member of the Clifton Forge Presbyterian Church. I grew up in the church family alongside Lois in the youth and handbell choir. Mr. James was such a kind and caring man and he will be missed greatly. Sending prayers of comfort to his family and loved ones at this difficult time. Tina Jones
Comment Share
Share via: 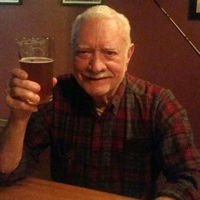