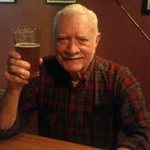 He was born January 27, 1932 in Bradford, Pennsylvania to the late Earl Gordon James, Sr. and Nellie Stroup James. He served in the United States Navy in the late 1950’s and was a retired Chemical Engineer for Hercules in Covington. Gordon was very active in the community including helping with the Red Cross blood drive for 11 years, helping with the Clifton Forge Food Pantry since 2006, and being involved with the Clifton Forge Arts and Crafts Center. He was a member of the Covington and Hot Springs Rotary where he was the secretary for 11 years, the president for a year and the team leader for the group study exchange for the Philippines. He was a member of the Clifton Forge Presbyterian Church, since 1968, where he served on various committees, and was the Moderator for the Presbyterian Synod. From 1972-2018 he was a constant member of the Session of the church, and served on the collections/deposit committee from 1989-2019.

In addition to his parents, he was preceded in death by three sisters, Audrey J. Fox, Mona Robinson and Barbara Lore.

In keeping with his wishes, his body will be cremated. A celebration of life will be held on Friday, October 9, 2020 at 11:00AM in Clifton Forge Presbyterian Church with Reverend Paul Brokaw officiating. The family will receive friends one hour prior to the service in the fellowship hall of the church. The family asks that masks be worn and bright, cheerful clothing be worn in his memory.