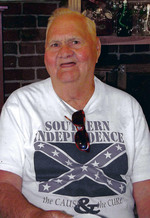 Jiggs was born October 29, 1930 in Clifton Forge to the late Charles Preston Hall and Letcher Love Hall. He served in the United States Army for seven years and was a veteran of The Korean War. He was also a member of the Clifton Forge Presbyterian Church.

He is survived by a sister, Bernice Crawford and husband Malcom of Covington; a brother, Richard Hall of Clifton Forge; a number of nieces and nephews, including a special nephew, Nathan Mays; and a special friend, Chicken Wing of Clifton Forge.

A funeral service will be held on Monday, November 2, 2020 at 2:00 PM in the chapel of Nicely Funeral Home, Clifton Forge with Reverend Paul Brokaw officiating. His body will be cremated following the service. The family will receive friends on Monday afternoon from 1:00 PM until the time of service at Nicely Funeral Home.