To share your memory on the wall of Oteria Wallace-Broady, sign in using one of the following options:

Print
“Yea, though I walk through the valley of the shadow of death, I will fear no evil, for thou art with me…." Psalm 23:4

Oteria Vivian Wallace-Broady was born in Clifton Forge, Virginia on December 31, 1950. She departed this life on ... Read More
“Yea, though I walk through the valley of the shadow of death, I will fear no evil, for thou art with me…." Psalm 23:4

Oteria Vivian Wallace-Broady was born in Clifton Forge, Virginia on December 31, 1950. She departed this life on Friday, December 25, 2020 at Carilion Roanoke Memorial Hospital. She was the daughter of the late Mr. Leonard L. and Mrs. Viola Brown Wallace. Oteria, affectionately known as “Ms. OT”, was the oldest of eight children and considered a matriarch after the death of her parents.

Guided by her mother, Oteria found the Lord early in life and was baptized at Main Street Baptist Church during the pastorate of the Reverend Dr. James A. Braxton, Sr. Being an active member of the church, she served in several capacities including singing in the Senior Choir and J. B. Williams Chorus, and she also served as the Church Clerk for a number of years.

Oteria enjoyed life, had a number of friends, and loved to sing at various churches and for hometown funerals. She also loved to shop, cook, and decorate. Some of her fondest memories include hosting people in her home, hanging out with her high school classmates when they came to town, especially a lifelong friend, the late Lenford C. Hatcher.

She attended Jefferson High School and graduated from Clifton Forge High School in 1969. Later, she also attended Dabney S. Lancaster Community College earning a certificate in Pulp and Paper Technology. She worked for MeadWestvaco for twenty-eight years until her retirement. She was an avid University of Virginia sports fan.

A funeral service will be held for the family. It will be private. However, friends may call anytime on Thursday or Friday at Nicely Funeral Home during regular business hours.

The family suggests memorial tributes take the form of contributions to The American Heart Association.

To send flowers to the family or plant a tree in memory of Oteria Wallace-Broady, please visit our Heartfelt Sympathies Store.

There are no events scheduled. You can still show your support by sending flowers directly to the family, or planting a memorial tree in memory of Oteria Wallace-Broady.
Visit the Heartfelt Sympathies Store

We encourage you to share your most beloved memories of Oteria here, so that the family and other loved ones can always see it. You can upload cherished photographs, or share your favorite stories, and can even comment on those shared by others.

Mr and Mrs John Sampson, Don Johnson, and other have sent flowers to the family of Oteria Wallace-Broady.
Show you care by sending flowers

Posted Jan 03, 2021 at 02:31pm
Our hearts are heavy with grief at the loss of your and our dear loved Oteria. Please know that we share in your sorrow, and words can never express our true feelings. May the Good Lord above keep us all in the mighty power of his grace. Rest in Peace sweet soul and we know you will enjoy your heavenly home with those who have gone before you.

Posted Dec 31, 2020 at 02:15pm
Bucky,and the Wallace family. my wife and I are truly saddened about your loss.Oteria was a good friend of ours and she will be in our hearts forever. Bucky if Ican help in any way please call thank you for being a friend.may our Lord and Saviour comfort you and the Wallace family. With all of our Love and Prayers Pete&Carol Reid
Comment Share
Share via:
N

Posted Dec 31, 2020 at 12:17pm
want to express my heartfelt sympathy to Ingrid and the entire family. I pray that you find strength in your love and precious memories of your beautiful Mother and loved one!
Comment Share
Share via:
MS

Posted Dec 30, 2020 at 07:09pm
I hope it helps to remember that your loved is in God's care. Please know you're in our thoughts and prayers and if you need me Just call.

Posted Dec 30, 2020 at 03:02pm
With heartfelt condolences, May our Heavenly Father Comfort you all during this time. The Choir in heaven has just received another Beautiful Angel. 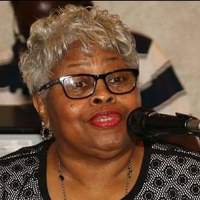