To share your memory on the wall of Jeffrey Alleman, sign in using one of the following options:

Jeff was born January 7, 1962 in Wheeling, West Virginia to James Joseph and Judith Joyce Kirchner Alleman. He was a 1985 graduate of Marshall University, where he earned a Bachelor of Arts degree in education. He began his teaching career as a middle school science teacher for Alleghany County Schools in 1986 and was appointed the Technical Coordinator for the Alleghany and Covington School Systems in 2001. In 2016, he became Director of Technology for Alleghany County Public Schools.

Jeff was known for his tireless commitment to the education and nurturing of students in our community, especially during this time of remote learning. He was an accomplished musician and, with the help of friends, recorded and published a children's story, "Tales from the Big Woods". He had many other hobbies, including flyfishing and woodworking. He was an avid student of history and family genealogy. He was happiest surrounded by his beloved family on his "farm" in Potts Creek or his little cottage in NC. In recent years, he and his wife enjoyed concerts, traveling, and camping. His proudest moments were achieved when he became a grandfather to Ella and Nora.

He was preceded in death by his father-in-law, Roscoe Wise and a brother-in-law, Steve Harrison, of Ohio.

The family suggests memorial tributes take the form of contributions to the American Diabetes Association, in honor of his daughters Emily and Hannah. Donations can be received at www.diabetes.org or mailed to PO Box 7023, Merrifield, VA 22116-7023.
Read Less

To send flowers to the family or plant a tree in memory of Jeffrey "Jeff" Alleman, please visit our Heartfelt Sympathies Store.

There are no events scheduled. You can still show your support by sending flowers directly to the family, or planting a memorial tree in memory of Jeffrey "Jeff" Alleman.
Visit the Heartfelt Sympathies Store

We encourage you to share your most beloved memories of Jeffrey here, so that the family and other loved ones can always see it. You can upload cherished photographs, or share your favorite stories, and can even comment on those shared by others.

J, Sarah and Jesse and Jim and Judy Alleman sent flowers to the family of Jeffrey "Jeff" Alleman.
Show you care by sending flowers

Posted Jan 13, 2021 at 07:57am
Suzanne and family
I enjoyed many years of working with Jeff. My sincere wishes that you are wrapped in precious memories. And that Jeff is in the arms of Jesus.
In Christ
Cynthia Rodes
Comment Share
Share via:
ED

Posted Jan 12, 2021 at 07:19am
So sorry for your loss. My heart breaks for all of you. May God grant you peace, health and strength in your time of loss.
Comment Share
Share via:
IB

Posted Jan 11, 2021 at 08:59pm
Sending condolences on the loss of your loved one. Jeff was a great person. I had the pleasure of working with him during my time in the Central Office, and he was a true professional.....always willing to help anyone who needed assistance. Praying you're comforted by memories and held close in God's love.
Comment Share
Share via:
PP

Posted Jan 11, 2021 at 03:52pm
Jeff was a colleague when I taught at Clifton Middle School. He was an amazing man with a big smile whenever you would meet him. His students were given the best instructions to help them have a positive outcome in his classes. He will be missed by many.
Comment Share
Share via:
DS

Posted Jan 11, 2021 at 03:15pm
I am so sorry for your loss. Your family is in my thoughts and prayers. Jeff was amazing to work with and was so thoughtful and was a mentor to me. 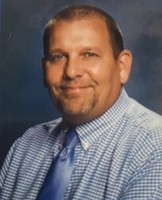