To share your memory on the wall of Frances Wolfe, sign in using one of the following options:

To send flowers to the family or plant a tree in memory of Frances Wolfe, please visit our Heartfelt Sympathies Store.

There are no events scheduled. You can still show your support by sending flowers directly to the family, or planting a memorial tree in memory of Frances Wolfe.
Visit the Heartfelt Sympathies Store

We encourage you to share your most beloved memories of Frances here, so that the family and other loved ones can always see it. You can upload cherished photographs, or share your favorite stories, and can even comment on those shared by others.

TGC members and friends sent flowers to the family of Frances Wolfe.
Show you care by sending flowers

Posted Jan 21, 2021 at 11:36am
We want to let you know that Frances is a revered person in our hearts. She was a joy and inspiration to each member of the club.

TGC members and friends purchased flowers and planted a memorial tree for the family of Frances Wolfe. Send Flowers

Posted Jan 19, 2021 at 07:02pm
The best Aunt ever! She has left a huge legacy that will be lived out by her daughters and grandsons and her nephews and nieces. I will miss her. She was always so positive and fun to talk with and was a huge part of both my childhood and adulthood. We were all lucky to have had her and will always remember all that she meant to us.
Comment Share
Share via: 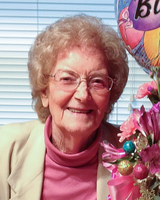