To share your memory on the wall of Jack Lewis, sign in using one of the following options:

To send flowers to the family or plant a tree in memory of Jack Walter Lewis, please visit our Heartfelt Sympathies Store.

There are no events scheduled. You can still show your support by sending flowers directly to the family, or planting a memorial tree in memory of Jack Walter Lewis.
Visit the Heartfelt Sympathies Store

We encourage you to share your most beloved memories of Jack here, so that the family and other loved ones can always see it. You can upload cherished photographs, or share your favorite stories, and can even comment on those shared by others.

Posted May 12, 2021 at 12:29pm
I am so sad to know that Jack has passed. We went way back together â€“ to 1956 in Beaver County, PA. An article about my being appointed to the academy appeared in Beaver County Times. I was listed as Robert Leroy Martin. True, but having gone by â€śLeroyâ€ť for almost 19 years I was happy when Jack called to hear him ask â€śis this Bob Martin?â€ť I said â€śit is nowâ€ť â€“ and it still is!
Jack and I went by train together from Pittsburgh to New London and we roomed together our â€śswabâ€ť summer (1956). We also went together on our first leave at Thanksgiving to New York City and stayed with my uncle in Manhattan. And we hung out together in Bergen, Norway in 1957.
I will miss Jack but I treasure the times we talked in the recent past.
Robert L. "Bob" Martin
2643 Empie Drive
Leland, NC 28451
919-602-7072
robert.martin1937@gmail.com

Posted May 10, 2021 at 09:15am
My dear Carol, So sorry for your loss. I know your mixed sorrow and thankfulness. Sorrow that he's gone and thankful that he is no longer suffering

Posted May 09, 2021 at 12:44pm
I met Jack at precisely the same moment (30-some-odd years ago) that I met Carol, when my husband (Marc) set up a "blind date" couples dinner. Marc was working with Carol, who at the time was a freelance technical writer. I was a newlywed and new to San Diego, therefore, I'd not yet made any local friends of my own. This greatly concerned Marc and he wanted me to meet Carol, sensing we would hit it off. He certainly called that one right! Carol and Jack have been a part of our lives ever since. Jack Lewis was the definition of a "good man." He managed in spectacular fashion to overcome his humble beginnings and at the same time retained his down-to-earth good nature, curiosity, and unbridled joy in all that life had to offer. Our lives are better for knowing him. We miss him something fierce already. Our deepest condolences and all our love to Carol.
Comment Share
Share via: 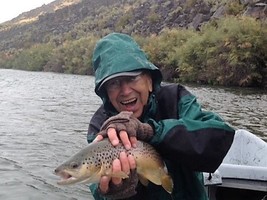