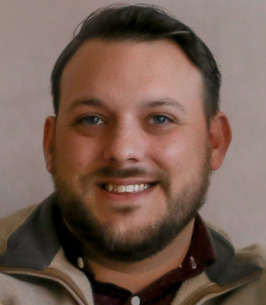 He was born November 3, 1986 in Wisconsin to Daniel Raymond Ogilvie and Delora Anne Chambers Ogilvie. He served four years in the United States Marine Corps with two tours in Iraq and Afghanistan and continued to serve his community as a police officer for the City of Covington. He was a volunteer fire fighter and EMT for the Roanoke Valley, a Chicago Bears fan, and enjoyed creating TikTok’s for the Covington Police Department. He loved spending time with his family, loved his German shepherd dogs, Penny and Major, and loved making people laugh.

In addition to his parents he is survived by his wife, Natasha Erin Ogilvie of Selma; four daughters, Emersyn and Wrenley Ogilvie of Selma, and Kileigh and Rilyn Ogilvie and their mother, Malarie Ogilvie, of Christiansburg; a sister, Abigail Chavez of NC; two brothers, Rian Ogilvie of IL and Benjamin Ogilvie of NC; father-and mother-in-law, Oler Dudley Jr. and Brandy of Clifton Forge; sister-and brother-in-law, Teresa Wright and Joseph of Clifton Forge; brother-and sister –in-law, Oler Dudley III and Mallory of Norfolk; and a number of nieces and nephews.

A funeral service will be held on Saturday, March 19, 2022 at 12:00 Noon in the Convocation Center of Dabney S. Lancaster Community College, Clifton Forge with Mr. Chris Fisher officiating. Interment will follow in Cedar Hill Cemetery, Covington. The family will receive friends on Friday afternoon from 2:00PM until 6:00PM at Nicely Funeral Home, Clifton Forge. The family will also be receiving friends on Wednesday evening and Thursday evening from 4:00PM until 6:00PM at the Ridgeway Room, Clifton Forge.